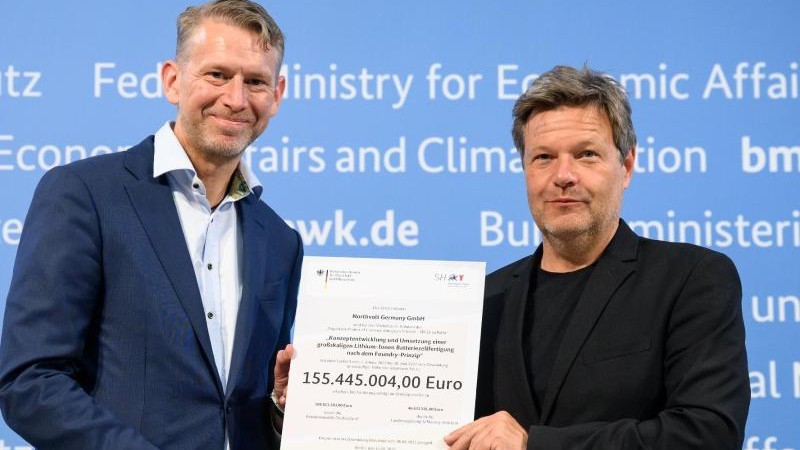 Berlin / Heide (dpa) – The planned battery cell production on the west coast of Schleswig-Holstein has made an important step. Federal and state governments promised Swedish company Northvolt on Wednesday 155.4 million euros, 70 percent of which will be paid by the federal government. “The Northvolt investment will further strengthen electric mobility in Germany, reduce our dependence on imports and create around 3,000 jobs,” said the Federal Ministry of Economy in Berlin.

Germany is placing emphasis on an industrial scale for Europe to become the center of global battery production, said Economy Minister Robert Habeck (The Greens). “Just a few years ago, almost all batteries were sourced from Asia. Now that is changing at a tremendous speed. “

However, the project near Heide in Dithmarschen, which is expected to cost up to 4.5 billion euros, is not yet fully completed. Until now, there has only been a declaration of will with the Kiel state government that gives Northvolt by the end of 2022 to make a final decision.

“On the way, there are some last remaining issues to be clarified, in which the state and federal authorities will actively support,” says Berlin. According to Northvolt’s boss Peter Carlsson, the remaining open questions include, for example, the need for better rail connections to the location and better transport links to the metropolis of Hamburg, some 100 kilometers away. According to Carlsson, Northvolt has already installed a small team there with a Heide start in mind. In addition, Northvolt continues to work to clarify the long-term energy supply that will enable competitive production with long-term stable energy prices.

The main argument in favor of the location near Heide in Dithmarschen is the extensive expansion of wind power there, which Northvolt has clearly identified as one of the most important arguments. Because the declared goal of the Swedes is the production of batteries for electric cars with “the smallest ecological footprint in continental Europe”. Prime Minister Daniel Günther (CDU) said that the fact that the state has focused on expanding wind energy in recent years is now paying off. “If you want to build the greenest car battery in the world, better than Schleswig-Holstein with our electricity from renewable energy sources.”

Habeck stressed that renewables are the “true location factor” and that companies make billing decisions based on whether enough renewable energy is available. “And Heide is predestined for that – the western coast of Schleswig-Holstein, but also the connection to large offshore wind farms make this region an energy bank for renewable energy,” stressed the Vice-Chancellor, who was the minister of the environment at his home. Schleswig-Holstein before switching to Berlin policy.

Habeck likes to talk about green energy as a location advantage. His credo: Switching to more climate-friendly forms of energy production is not only helping to combat global warming, but is also a matter of economic sense.

Habeck calls his vision of a climate-friendly conversion a “socio-ecological market economy”. Planning procedures are to be accelerated and streamlined to accelerate the expansion of renewable energy sources, even against resistance, to expand energy networks and make wind farms more attractive through the financial participation of citizens. The example of Heide shows that once structurally weak regions can also benefit from the energy transition. It is one of the largest industrial settlements in Schleswig-Holstein. Especially that the Northvolt factory will probably result in further settlements, e.g. by suppliers, and therefore the hope of the state government in Kiel.

However, the new factory is important far beyond the region to the north: the factory aims to help strengthen the electric mobility supply chains in Germany and Europe compared with the Asian suppliers that have dominated so far. In addition to the climate-neutral restructuring of the economy, Habeck is also concerned with reducing structural dependence on politically problematic trading partners. The shocks in the supply chains during the krone pandemic and the prior dependence on Russian energy supplies have placed the subject in the spotlight.

Individual producers use different approaches to achieve more in-house production in the local economy, partly with their own development and production, but partly with supplier partnerships and adequate participation. For example, Northvolt works closely with Volkswagen in the production of battery cells; the Wolfsburg-based company also owns a 20 percent stake in the Swedish company. The Swedes are increasing production capacity specifically for VW at their first factory in Skellefteå, northern Sweden, which has been producing since the end of 2021.