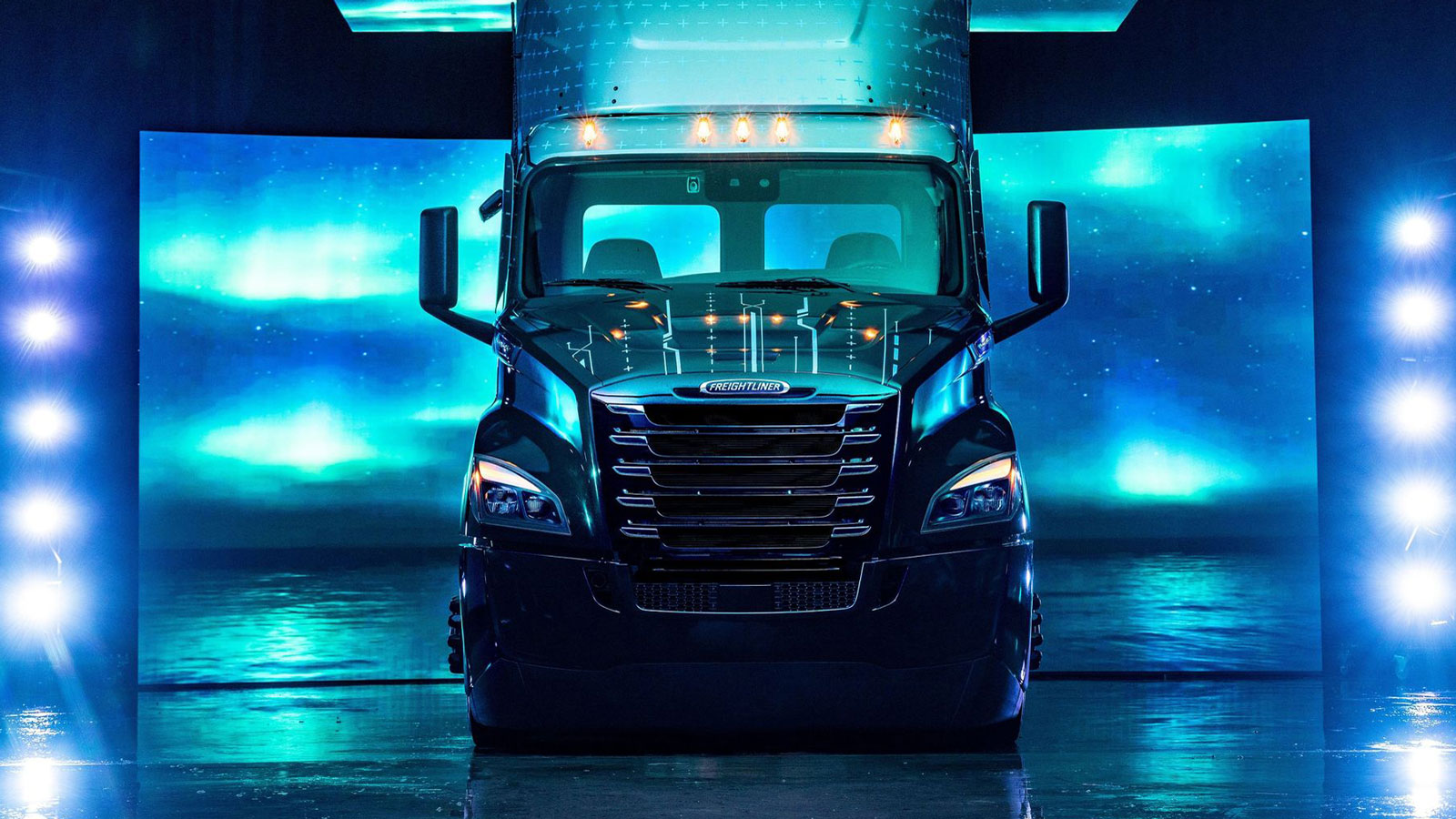 As in Europe, a new era in the US logistics and transportation industry is about to begin. Gone are the days when powerful diesel trucks were the only kings of highways and highways. As with passenger cars, electrically powered trailer trucks attack habitats for fossil-fueled alpha animals.

One of the first new electric trucks – far from the Tesla Semi – is the eCascadia Freightliner, which will be running on the roads between New York and Los Angeles from autumn. “To ensure that the new truck was exactly tailored to customer needs, we took the experience of large fleet operators such as Pepsi, Ikea and Penske into account during design,” explains product manager Kevin Otzenberger.

At first glance, eCascadia is almost no different from its conventional brothers: the powerful engine compartment in combination with the large driver’s cab has always been a visual distinguishing feature of American trucks from European trucks. However, in the E version of the loaded tractor, more emphasis was placed on aerodynamics. Technically speaking, the eCascadia shares some features with its European counterpart, the Mercedes eActros. However, the wiring is different as the electrical system of the low voltage vehicle is typically 24 V in Europe and 12 V in the USA.

Stores the battery for up to 438 kilowatt hours

The eCascadia driveline is sourced from Detroit Powertrain, a subsidiary of Daimler Truck North America. There is a choice of one or two electric axles ranging from 235 kW (320 hp) to 346 kW (470 hp). Both types of drive can be combined with three different sizes of NMC (Nickel-Manganese-Cobalt) lithium-ion batteries: 194 kilowatt-hours (kWh) (average charging time from zero to 100 percent: 90 to 180 minutes), at 291 kWh ( two to four hours) or 438 kWh (two to six hours).

The prism cells are from the Chinese CATL supplier. They can be charged via a CCS1 connector with a charging power of up to 240 kilowatts. The 400 volt technology is still installed today, but the next generation eCascadia will likely be on the way with only 800 volts.

Range up to 370 kilometers

Depending on the configuration, the eCascadia has a range of 155 miles (249 kilometers) to 230 miles (370 kilometers) if only one e-axle is installed and connected to a large battery. Powerful batteries are housed in the center of the tractor. “The biggest challenge was to adapt the battery,” says Rainer Müller-Finkeldei, Head of Technology for Daimler Trucks North America.

eCascadia has two cooling circuits: one for the batteries and one for the axles or motors. Auxiliaries such as air conditioning and an air compressor are no longer belt driven, but electrically driven. They are now under a powerful mask.

The electric truck can carry a load of up to 82,000 pounds (equivalent to approximately 37 tons). Digitization went to the passenger compartment. Two LCD displays, one as a virtual instrument panel and the other as the command center for the infotainment system, provide the driver with all the necessary information and data.

eCascadia is also a pioneer for future Daimler North America trucks when it comes to assistance systems where assistants include an Active Lane Departure Warning System, which helps the driver to keep a heavy vehicle on course even in crosswinds. The system also helps in tight turns, and the adaptive cruise control with Active Emergency Braking Assist takes the strain off the driver while driving.

Every week we inform you about connected life, renewable energy and new mobility. Our newsletter summarizes the best texts, photos and backgrounds in a concise and informative way – sign up here without obligation:

thank you for your registration

Every week we inform you about connected life, renewable energy and new mobility. Our newsletter summarizes the best texts, photos and backgrounds in a concise and informative way – sign up here without obligation:

thank you for your registration