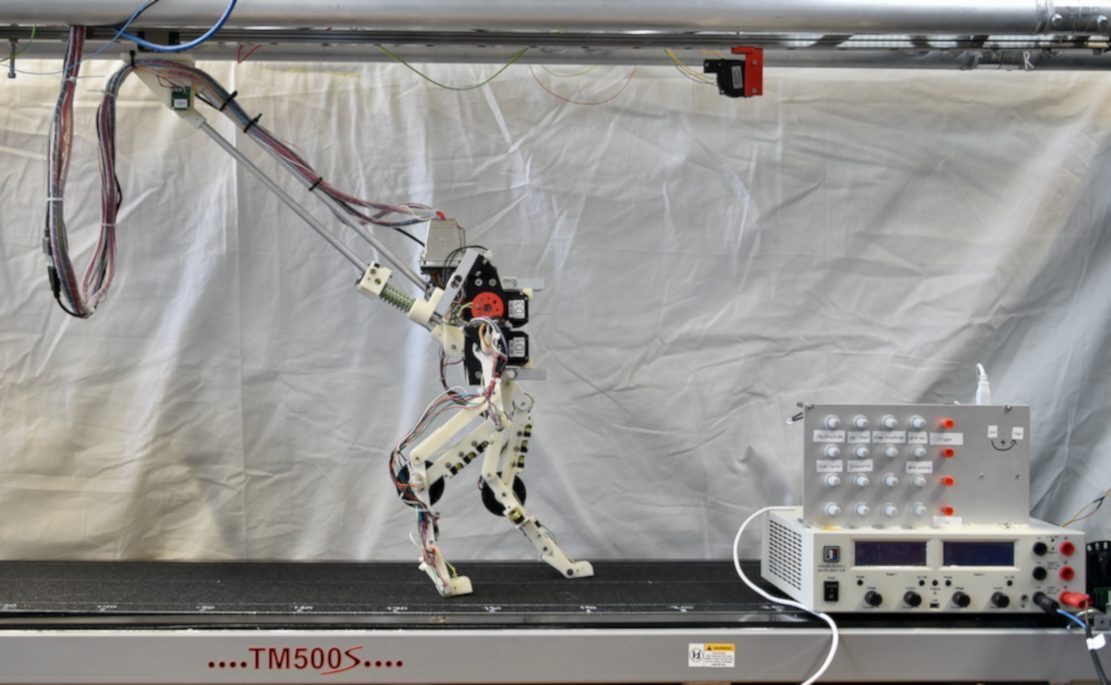 Scientists have constructed a robotic leg that requires few motors and control technology due to the ratite-inspired foot-to-leg connection. This makes the “BirdBot System” very energy efficient and reliable, as shown by treadmill tests. Scientists say the concept could even one day set tons of walking robots in motion with little effort. However, the results are not only important for robotics, but also shed light on the biological foundations of the anatomical concept.

They move agile on two legs at speeds of up to 55 kilometers per hour: ostriches, which can weigh up to 100 kilograms, illustrate the efficiency of the ratite’s locomotion system. Unlike our upright gait, their anatomical principle has deep roots in developmental history: Tyrannosaurus et al. Already had a similar leg structure and gait to today’s birds. Apparently, this is a concept that has proven itself due to its energy and functional advantages. But what is the secret of the bird’s leg, and to what extent can its mechanisms be transferred to robotic systems? Scientists led by Alexander Badri-Spröwitz from the Max Planck Institute for Intelligent Systems in Stuttgart are investigating this question.

Successful pairing is the key to success

As they explain, the concept of a bird’s leg has an aspect completely different from our mechanism: when people walk, they lift the leg and bend the knee, but their foot and toes are almost unchanged. On the other hand, the birds fold their legs backwards during the swing phase. Research by Badri-Spröwitz and his colleagues suggests that this movement is a passive result of a mechanical coupling: it is not caused by the nervous system and muscle activity. “We can see that a network of muscles and tendons that span many joints makes this connection possible. Multi-articulated hamstring cables cause the foot to fold during the swing phase, ”says Badri-Spöwitz. It is suspected that this may have something to do with the advantageous underlying mechanism.

To test their assumption, researchers built a robotic leg modeled on a ratite leg. Using cables and springs, they constructed it in such a way that the foot does not require a separate motor, but only one joint, which is mechanically coupled to the rest of the leg joints. The motor in the hip joint allows the leg to move forward and backward. Another motor in the knee joint also causes the knee to bend to pull up the artificial limb. Finally, scientists built a two-legged prototype to test the system.

Treadmill studies have shown that the robot actually folds and unfolds the feet while walking, similar to natural models. Analyzes have also shown that the coupled mechanism in the leg and foot enables the BirdBot to operate in a very energy-efficient and robust manner, and that it literally comes into play when standing. Because the ankles and legs do not need motors in the stance phase. “The power comes from the spring and the coordination comes from the multi-link pull mechanism. When you pull up your leg in the swing phase, the foot turns off the leg spring – the muscle, ”Badri-Spröwitz explains. “In the past, however, our robots had to work against a spring or engine, standing up or lifting the legs, to prevent the leg from hitting the ground during the swing phase. This energy input is no longer needed with BirdBot. This has a positive effect, emphasizes his colleague Aghamaleki Sarvestani: “Overall, only a quarter of the energy is required compared to previous walking robots.”

In addition, previously a relatively complex control technology was required, which can now be saved. For most robots, switching between standing and walking has so far been provided by a motor on the joint that is turned on and off by a sensor system. “Thanks to BirdBot, the foot does this automatically for the running machine. All we need is a hip motor and one for bending the knee in the swing phase – the rest is done by the leg itself. Turning the leg springs on and off is left to the bird-inspired mechanics. It is robust, fast and energy efficient, ”sums up Badri-Spröwitz.

As the researchers point out, the replica now also sheds light on the biological significance of this concept in retrospect. The coupling of the joints in the legs and ankles and the forces involved explain why a large animal such as an ostrich can not only run so fast, but can also stand for long periods without any effort. In addition, the system appears to have an impact on ratites’ low stumbling tendency, as co-author Monica Daley of the University of California, Irvine has shown in previous studies. As the physical BirdBot model shows, time-consuming perception and transmission of stimuli in birds is replaced by pure mechanics.

But the scientists’ attention apparently focuses on the technology’s potential: “The project presented now is scalable and enables the development of robots with large legs,” write Badri-Spröwitz and his colleagues. Specifically, in their opinion, this means that it is theoretically possible to construct one-meter-long legs based on the principle of ratites, thanks to which robots weighing tons could one day move in an energy-efficient and stable manner.