The article can only be viewed with JavaScript enabled. Please enable JavaScript in your browser and refresh the page.

According to preliminary studies, working in virtual reality reduces productivity and promotes migraines and anxiety. The immersive office still has potential.

Researchers from the universities of Coburg, Cambridge and Primorska and Microsoft Research compare working in virtual reality with everyday life in a real work environment. The team is studying the effects on people’s physical and mental condition. The first survey gives the immersive office a poor opinion.

In the study, eleven men and seven women were asked to perform regular office work in a VR environment for a week. However, one man and one woman dropped out of the experiment on the first day. They complained of migraines, nausea and anxiety in the VR environment.

In order to be able to make a comparison, the first half of the remaining respondents started a virtual reality experiment. The other half started working on a desktop computer at the same time. Then it was swapped. Each test person performed eight hours of work with a 45-minute lunch break for five consecutive working days.

The Meta Quest 2 mobile VR glasses have been used for the VR environment. All the comfort settings were adjusted to the individual needs of the participants, and the VR glasses were introduced. The research team equipped the physical workplace with conventional office computers and curved monitors. 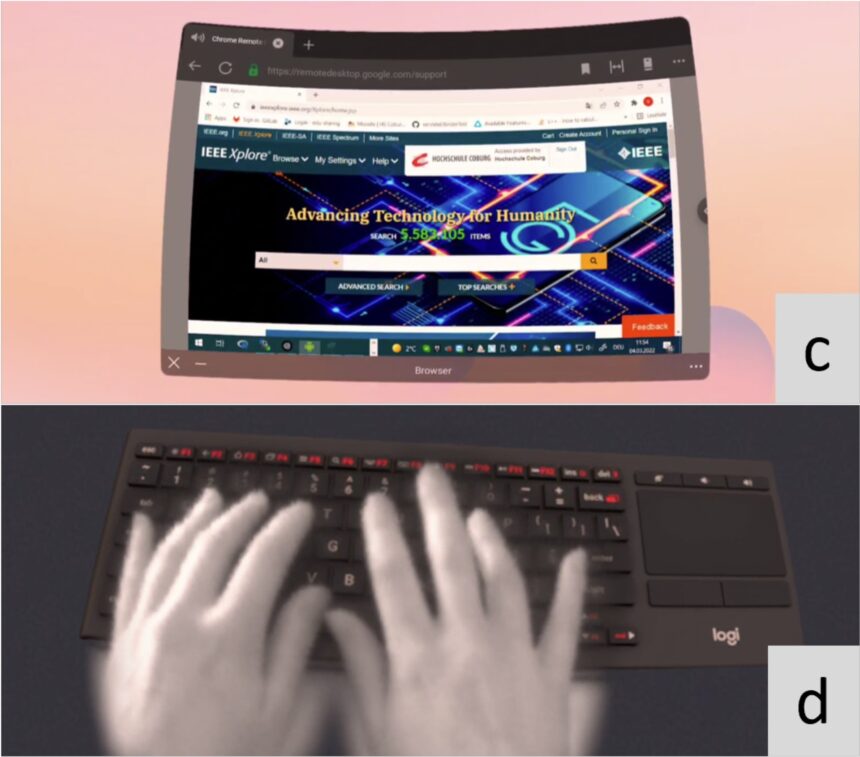 View through VR glasses: In the virtual work environment, the subjects work in a similar configuration as in reality. | Photo: University of Coburg

In the VR environment, the subjects saw a virtual curved monitor of similar size. Both environments used the same keyboard with a touchpad. The participants were deliberately not equipped with a high-class VR system. Scientists wanted to create a comparable situation between the VR environment and work with a common physical desktop configuration for office applications.

Before starting work, and then every two hours, the participants filled out questionnaires. In it, they presented their subjective assessments of task load, user-friendliness of the system, perceived productivity and workflow, frustration or overall well-being.

Study: Working in VR leads to disturbing levels of discomfort

On average, the respondents felt a greater workload in VR, although the type and scope of activities did not differ in both environments. Ease of use, workflow, and perceived productivity also performed better in the physical environment. 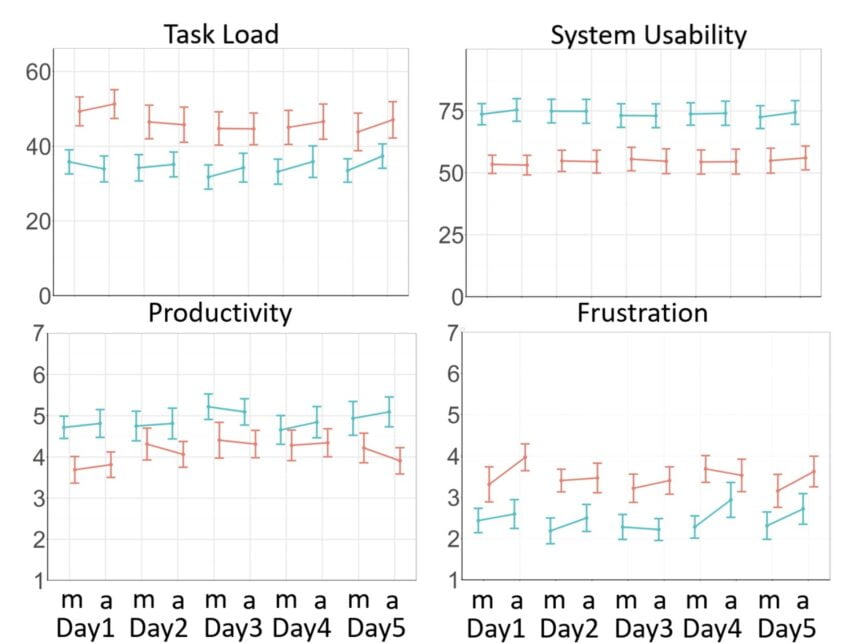 Working in a VR environment (red) is in most cases worse than working in a physical reality (green). | Photo: University of Coburg

Working in VR caused much more frustration, anxiety and discomfort among the participants, as well as increased visual fatigue. Overall, the researchers noted “worrying levels of simulator disease and below average utility ratings.”

The main reason participants were afraid under the VR glasses was that they could no longer perceive the presence of other people in the physical space.

In fact, simple activities were perceived as boring in a VR environment. Some participants were bothered by taking their VR glasses off while eating or drinking because they were afraid to spill something. They also missed an opportunity to write something down on paper.

However, according to the research article, there are signs that negative first impressions and initial discomfort can be overcome. The increased fatigue in VR could be related to the fact that the subjects did not work that many hours at a time in their normal everyday life.

Upon completion of the experiment, five participants said they got used to wearing VR glasses over time, two of which they eventually forgot. Nine people found virtual reality isolation positive, because it facilitates concentration on the task and prevents distraction of the environment.

Four participants clearly mentioned that they would like to try to integrate VR glasses into their normal daily work. Overall, however, only three participants preferred the VR environment.

Addictive work: the potential is far from exhausted

Meta should already be aware of many of the shortcomings mentioned. In addition, the technology is still in its early stages and the many features of Meta Quest 2 are just a first glimpse of what will be possible in the future.

The VR Meta office is to be more than a single virtual monitor. Already in 2020, Meta showed an early version of “Infinite Office” in which several virtual screens are also used for hand tracking (see video above). In cruising mode, the real environment remains in the user’s field of vision.

In the previously announced Cambria VR glasses (info), Meta will use much of the Quest 2 experience to improve the user experience and comfort. Office applications are high on the priority list. According to Met’s boss Mark Zuckerberg, Cambria will one day replace laptops and change the classic work environment. Apple glasses should also be able to digitally extend your Mac’s display, so they will likely help with productivity.

In the coming years, a lot will happen in the field of immersion work. The research team seems to think so too. According to the researchers, the study should form the basis for further research. It mainly shows the current shortcomings and opportunities to improve work experience in VR and should therefore be viewed more as an inventory than as a fundamental criticism. There are also other, better quality VR glasses on the market – a comparative study with alternative equipment would be interesting.

Note: Links to online stores in articles can be so-called affiliate links. If you buy via this link, MIXED.de will receive a commission from the seller. The price does not change for you.