The stairs to the vaulted basement of the armory lead to another world. Who likes to live here? A brilliant inventor? Mad professor? Maybe a machine monster? Markus Jordan’s “Laboratory” inevitably stimulates the imagination. The artist from Ingolstadt is sometimes called the “Frankenstein of things”. Going through the third edition of his spatial installation, it quickly becomes clear why this is so. Jordan combines art, science and technology into a spectacular total experience.

The arsenal next to the New Palace, which has been empty for years, provides the exhibition with an “almost perfect atmosphere”, Manfred Schuhmann said on Friday evening in his welcome speech at the opening. Ansgar Reiß, head of the Bavarian Army Museum, made the historic cellar available to the artist. “Thinking about the past can be enlightening,” he said from the sidelines of the opening. “Retrofuturistic Visions” is the subtitle of the exhibition. Jordan thus combines the bygone times with future prospects and encourages reflection on the historical and future connection between man and machine. His laboratory therefore surprisingly fits into the scope of the topics that will be discussed this year as part of the “Year of Science” in Ingolstadt on the occasion of the foundation of the Lyceum 550 years ago.

Jordan worked on remodeling the vault for four months. The center of the exhibition is a laboratory table that could actually be from a Frankenstein novel. On the shelves there is a buffet with curiosities that Jordan found in the scrap yards and put them back together. The vault houses objects from earlier exhibitions and completely new constructions, some of the old scenery of the municipal theater in which Jordan works as a prop. It hisses, crackles and flashes in every corner.

Humor plays a big role in the laboratory. During a guided tour of the vault, one stone suddenly floats from the gravel floor of the armory, the bucket suddenly whistles on the floor, and the pneumatic structure sets the snake in motion in a magical forest. On Friday, Daniel Mayer Garcia was particularly impressed with the machine that fires smoke rings through the vault at the push of a button. The eight-year-old, who describes himself as an artist, found the exhibition “super cool”. He particularly liked the fact that visitors to the exhibition could become active themselves. “The German Museum in Munich has always inspired me,” says Jordan. They understand very well that children especially like interactivity. “I’m a little childish myself.” The electrical department at the Deutsches Museum is currently closed. Reason enough to venture into the laboratory in the vaulted cellar of the Ingolstadt Arsenal.
Markus Jordan’s Laboratory is open Friday to Sunday from 11:00 am to 5:30 pm to August 28.

A permanent place for the laboratory – and all creative people

Artist Markus Jordan hopes to find a permanent location for his laboratory in Ingolstadt. It means a space that can also be used by other creative people of all genres for theater, lectures, concerts and dance. Already at the weekend, an extensive support program took place in the laboratory, curated by the chairman of Kunstverein Hubert Klotzeck, entitled “CO_Laboratorium”. As a member of the Hotzeck and Friends music collective, he himself took part in the musical accompaniment at the vernissage on Friday evening. “The laboratory is a place for experimenting,” says Klotzeck. This should also be reflected in the framework program.

Hotzeck also offered “live improvised machine music” on Saturday before siblings Maram and Malik Diao combined analog and digital sounds into an atmospheric collage of sounds as Duo Jitter. Musician and sound artist David Rimsky-Korsakov made the ceiling tremble with a brutal interpretation of Oedipus material. Then Digital Yatra created the atmosphere for the performance of the Tanzplan Ingolstadt band with their electronic sound. Led by Yahesemine Maceira, the actors walked through the lab and eventually got the audience involved as well. “Through our own body, we gain access to space again,” explained Maceira in the margins of the performance. “A successful experiment,” said one spectator at the end.

The circles of smoke swirling in the vault are a favorite feat of Daniel Mayer Garcia. 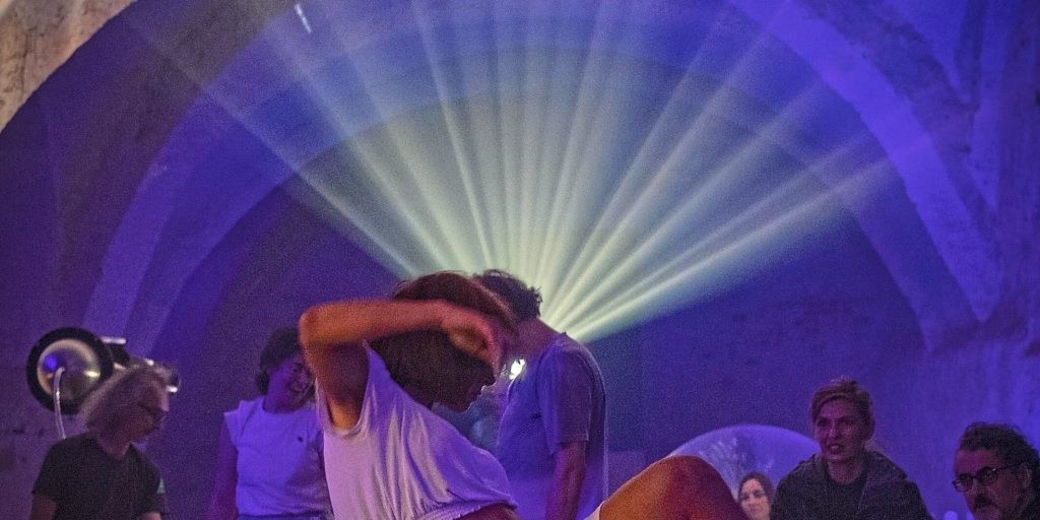 The Tanzplan Ingolstadt band performed on Saturday evening as part of the accompanying program. Photos: Hauser