Altmannstein / Mindelstetten –
The Big Test in Tiger and Dragons: 45 taekwondo students were able to convince examiner Bernhard Bruckbauer recently what they learned from their trainers. And the youngest of the Tigers and Dragons, Lil’Dragons, also had his exam before the big holidays.

Taekwondo, which originated in Korea, is a very disciplined sport. This can already be felt when the players enter the Dochang (sports hall). Out of respect for the sport and coach, and as a sign that they now want to devote all their intellectual time to Taekwondo, they bow before entering. After the warm-up, everything starts right away, in the end everything has to run smoothly so that all groups can be tested at the scheduled time this afternoon.

The test runs from a white to a green / blue belt for all applicants following the same pattern. First, the players line up in front of the coach and examiner, depending on their completion. “Charyeot” (attention) and “kyongye” (greeting) echo from trainer Christina Bruckbauer – and all students bow. The first important element is the traditional form, the so-called poomsae. Here, students prove their ability to concentrate, because it is important to perform the agreed combination of defense and attack techniques as smoothly, rhythmically and precisely as possible. Basic techniques which are also carefully considered by the examiner include various kicks and punches. It’s all about precision and clean workmanship.

Taekwondo students demonstrate their speed and strength with their claw kicks. During the “one-stage fight”, the examiner and Olympic base trainer Bernhard Bruckbauer pays attention to accuracy, clean technique and correct execution. In self-defense (Hosinsul), even the youngest show how they can free themselves from unpleasant situations. In the one-on-one competition, the test takers also showed combat strength, of course with the appropriate protective equipment. Higher grades have proven their power in the Break Test.

All test takers that day were well prepared by their trainers and can also shine in the theoretical questions that examiner Bruckbauer asks afterwards. Trainer Christina Bruckbauer was clearly proud of her mentee and congratulated all participants as warmly as tester Bernhard Bruckbauer.

Lil’Dragons aims to introduce children to the traditional martial art of Taekwondo in a friendly and fun way. During the test, girls and boys present basic techniques, kicks, partner exercises and test their skills. Young athletes can also shine by using Korean technical terms. At the end, children are free to take the recess test. One enters the mat with great excitement, because such a wooden board is a challenge. But with a wild battle cry and sonorous power, the children conquer the board and grow at least five centimeters.

Examiner Johannes Bruckbauer, who started out on his own with the first generation Lil’Dragon at the age of two and a half, can empathize with little taekwondolers because he himself once stood on such a small mat. Today he is the champion of Upper Bavaria, the champion of Bavaria, the vice-champion of Germany and still wins medals at foreign tournaments. All the more he is glad that after the exam he can hand over their certificates to enthusiastic youth.

Anyone who would like to test Korean martial arts can do so during the summer holidays from August 31. Then the slightly lean summer workouts begin again on Wednesdays and Fridays at 6:00 PM for children and 7:00 PM for adults. Anyone wishing to learn more in advance – including Lil’Dragons – can contact Head Coach Christina Bruckbauer on (0171) 5699320.

Taekwondo examiners of all ages have demonstrated their talent impressively and can now look forward to the next level. 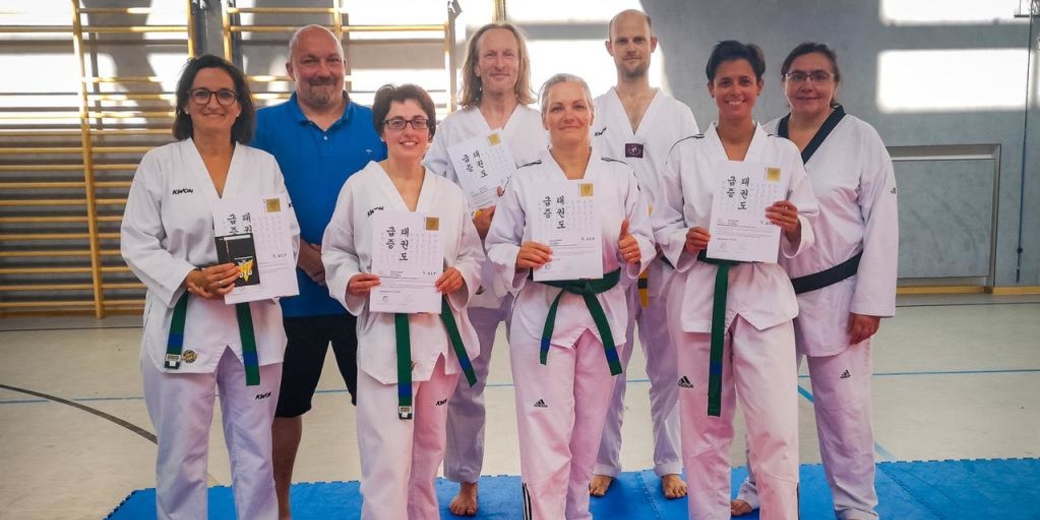