Late last year, David Beasley, head of the World Food Program (WFP), described the situation in Afghanistan as “hell on earth.” Since the Taliban took power in August 2021, there have been hardly any shootings, bombings or fighting. But since then, the country’s economy has plummeted. The Brussels-based think tank International Crisis Group has previously expressed concerns that “hunger and poverty following the Taliban takeover could kill more Afghans than all the bombs and bullets in the last two decades.”

Nothing has improved since last winter. Nora Hassanien, deputy director of national aid organization Save the Children in Afghanistan, told DW that “desperate families” must resort to “increasingly extreme and harmful coping strategies.” What does this mean exactly? “That includes selling children,” says Hassanien, “and other things they would never do.”

The overall numbers are as dramatic as the individual fates behind them. According to the United Nations World Food Program, nine out of ten Afghans face insufficient food supplies. With over 18 million people, half of them have so little food that they urgently need help.

Hunger at home: This 18-month-old girl is also not getting enough food

But there is no money. Only ten million people could currently be supported, said WFP Afghanistan director Mary-Ellen McGroarty at an online press conference in late July. Result: Priority should be given to those who are starving. Decisions are made on the basis of criteria such as the current nutritional situation or particular sensitivity. McGroarty spoke of an “extremely difficult and often painful” process.

Particularly affected: toddlers. According to data from the United Nations Children’s Fund UNICEF, more than one million children under the age of five are so malnourished that they require treatment. But often there is no treatment.

Because the health sector is also collapsing. Samira Sayed Rahman told DW about her visit to a hospital in southeastern Paktia Province: “There were not enough doctors, not enough nurses. The doctors we spoke to had not received their salary in the last six months. – says an employee of the aid organization, the International IRC Rescue Committee. “The wards were full of women holding malnourished children in their arms. In the case of premature births, three babies had to share an incubator. ‘ 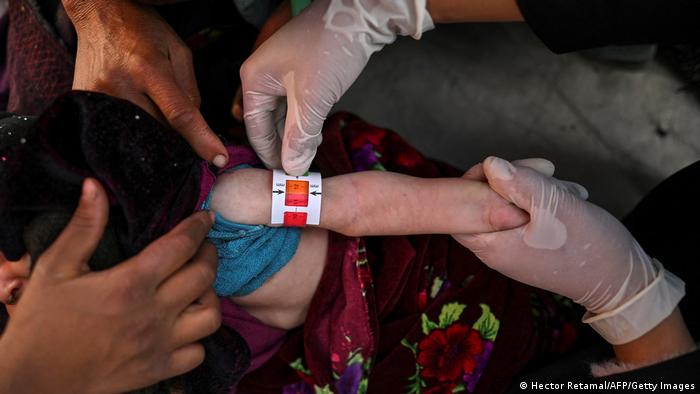 a country of many crises

Afghans face many crises. The decades of the war are destroyed. Climate change has been drying up fields in much of the country for three years. Elsewhere it brings floods or snow in mid-June. The ground also shook this year. But the biggest challenge, as is one IRC associate Rahman, is stopping payments from abroad.

For 20 years, the West has been heavily involved in Afghanistan: militarily, politically, and in development cooperation. The international community covered three-quarters of public spending. Tons of development projects have brought roads, schools, and hospitals and have made sure they are maintained. After the Taliban took power, the flow of money was cut off overnight. “There were around 400,000 public sector employees plus around 200,000 in security,” says Rahman. “Many of these jobs have disappeared; unemployment is at its highest, and so is inflation. ‘

To the chaos of sanctions

The Taliban were indeed US partners in peace negotiations, which quickly turned into disengagement negotiations. But the government they have formed is internationally unrecognized and isolated. This stopped the flow of money. In addition, the sanctions that have been imposed against Islamist terrorists now also affect the Taliban-led government apparatus – and thus the country as a whole.

There are two types of sanctions. The UN and the EU have imposed sanctions on individual Taliban members – including members of the “de facto government”, officially says the German Foreign Ministry. In addition, the United States unilaterally imposed sanctions on the Taliban, which Washington has listed since 1999 as a Special Designated Global Terrorist Organization (SDGT).

Taken together, these sanctions were aimed at economic isolation in Afghanistan, says Conrad Schetter of the International Center for Conflict Research in Bonn, BICC. “All economic opportunities are to be cut off. Everything beyond humanitarian aid has been suspended; all development projects in the country have been suspended. ” Schetter says Afghanistan has been completely separated from the economic and financial markets. Conclusion of the conflict researcher: “The Afghans were ejected back into the economy for their own needs.”

This was due to the decision of the US administration to freeze the Afghan central bank’s balance at around EUR 7 billion and withhold half of the amount of possible compensation for the victims of the September 11, 2001 terrorist attacks. This is a legally questionable step, says UN Special Rapporteur on unilateral coercive measures, Alena Douhan: “In international law, central bank money does not belong to the government, but to the country,” said Douhan DW.

However, without access to its foreign exchange reserves, the central bank can fulfill its role in the Afghan economy only to a very limited extent. Sanctions and a lack of currency make it almost impossible to transfer money to Afghanistan. Special humanitarian permits are theoretically possible. In practice, however, they are difficult to obtain. This also applies to German aid to Afghanistan. A spokesman for the German Ministry of Development, interviewed by DW, described “a defunct banking sector that makes it difficult for any money to reach Afghanistan at all” as “a serious challenge in implementing the measures.”

People with suitcases of money

Aid organizations therefore have to resort to unusual measures. Elke Gottschalk, Weltungerhilfe Regional Director for Asia, tells about this in an interview with DW. Money orders would have to be processed through other payment channels, through the Hawala network. In practice, this means that Welthungerhilfe first transfers its money to an account of Hawal’s agent in a third country, explains Gottschalk. “These agents then ensure the money arrives in Kabul – in cash. We count them there and we can use them. 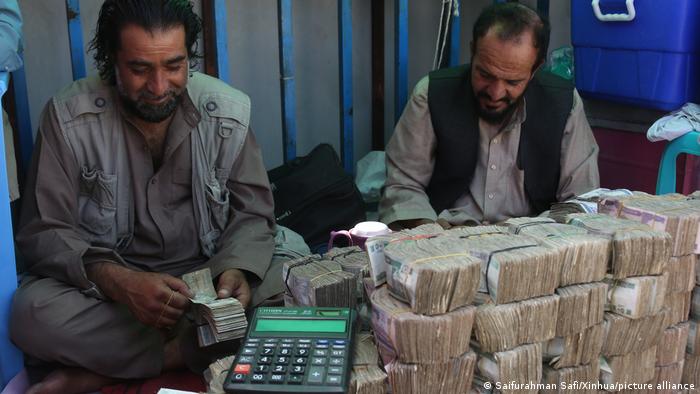 The International Rescue Committee also relies on hawala nets, confirms Samira Sayed Rahman. However, this is not “not foolproof and sustainable.” Regarding the famine in Afghanistan, Rahman is convinced: “This crisis is man-made, it was caused by the international community.” Review provided by Nora Hassanien of Save the Children. He adds: “No humanitarian aid will solve the problem here. A bigger solution is needed. “

The International Crisis Group agrees. In early June, Graeme Smith, Afghanistan specialist in a think tank, wrote after visiting Kabul: “To save the country from the abyss of an even greater catastrophe, end the country’s isolation, encourage development aid, and convince Western and regional governments to help in the economic recovery ”.

The dilemma remains that this is only possible thanks to cooperation with a regime that is massively violating human and minority rights, especially of women and girls. Achim Steiner, head of the United Nations Development Program, has a clear position on this. At the end of May, at the World Economic Forum in Davos, he put it briefly: “We cannot just abandon 40 million Afghans out of moral outrage.”